Austrian authorities arrested  Mr. Bond on charges of copyright infringement and (most importantly) “Promoting Nazi ideology” (a crime that has seen past offenders serve anywhere from 33 months to 5 years!) 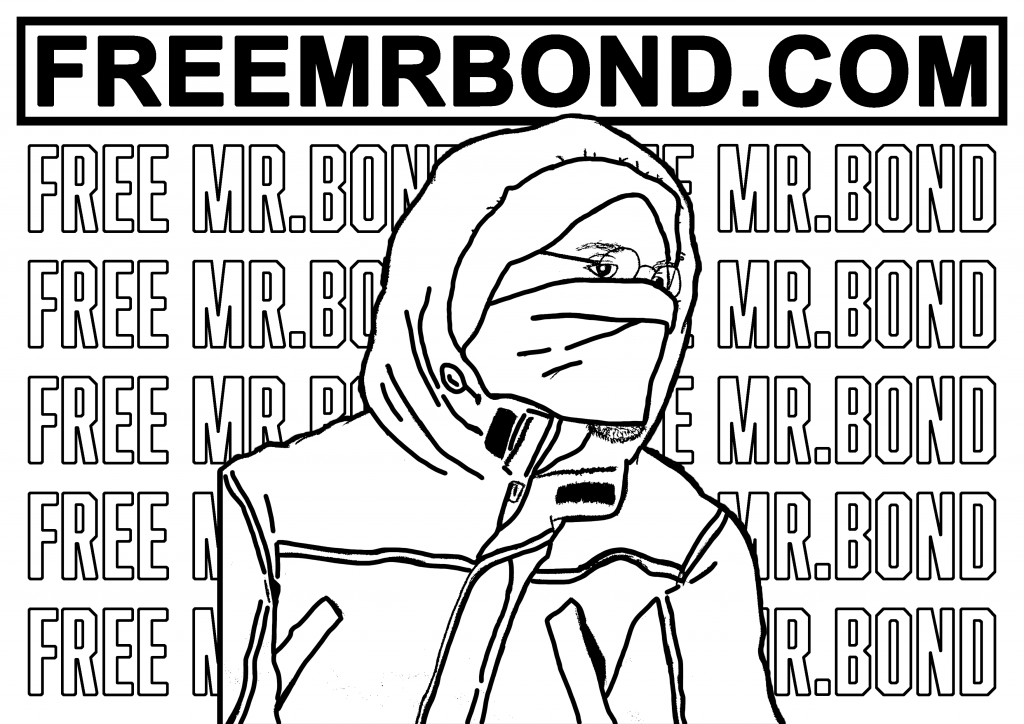 For every .00025 BTC sent you will “automagically” receive a FREEMRBOND NFT (while they last!)

These NFTs are minted on the Bitcoin Blockchain via Counterparty (XCP) – so you WILL receive them directly into your bitcoin wallet, but will need a XCP compatible wallet to view/interact with them. (Best way is to make a new FREE wallet, or import your current wallet to FREE wallet!)

If you’re reading this, you are probably aware of my arrest in January 2021 and my trial in March 2022, and the insane verdict I received.
Because I’ve been incarcerated ever since, I haven’t been able to directly communicate with anyone, except for a few people who dared to write me with a return address.

This is why I’ve asked my friends to publish this message, because I want to finally say thank you to everyone out there who supported me in any way. Thank you to everyone who contributed to my legal fund (https://freemrbond.com/), (https://freemrbond.com/)thank you to all the guys who organized the whole thing and even put up a website to help me. I’m totally cut off in here, so for a long time, I had no idea about all the things that were going on outside. What people were doing, saying, what the press was writing, etc. I still don’t know a lot.

Thank you also to everyone spreading the word about my case, all the people and groups who sent me anonymous letters and postcards – I appreciate each and every one of them. It’s a pity I can’t reply to you personally. I’d love to get to know the people behind all those nice and encouraging messages and link up with you, especially the closer ones from Austria and Germany…but of course I understand you wish to remain in the dark.
To everyone who DID leave a (real) return address and didn’t get a reply from me – they either censored your letter, or my response. In that case I’m sorry, just don’t think it was me ignoring you intentionally.

About my current situation: I’m obviously fighting the verdict, so we have filed an appeal. This is going to take another couple of months however, so it’s more waiting in this shitty jail in Vienna, where they keep me locked in a small two-man cell 23 hours a day (Only once my verdict is final, I’ll be transferred to the prison where I’ll do my time, or what’s left of it. There I’ll have a lot more “freedom”, activities and space to move around.) But I’m in good spirits and I try to stay in shape as well as I can doing bodyweight exercises in my cell. Like it says in a song I used to enjoy :
“No matter what they did, they could never take his smile.”

Thankfully I can order books from the internal library, so I spend a lot of time reading. Days are going by fairly quickly if you have a bit of a routine and little daily rituals.

Another constant source of encouragement and delight is watching the steadily accelerating disintegration of “Western” “society” and this cancerous neo-“liberal” system, due to its own arrogance and decadence.
People have been predicting the collapse for decades and it never came, but jokes about preppers have become pretty stale during the past three years and I believe the scenario of me getting out of here easily due to some blackout, financial crash or military conflict situation is no longer a mere cope, but a real possibility.
And even if they somehow manage to keep the clown show running for another couple of years, the pendulum is going to swing back with that much more force in the end – which is enough to keep me in a perpetually good mood.

Meanwhile I hope you’re all doing well and you’ve working on becoming the most useful people possible in the (post-) apocalypse, linking up with like-minded individuals and preparing for “impact”.

Oh, and if you know someone who’s in prison and you haven’t written them yet, consider doing so. You’re probably underestimating how much a letter from outside brightens someone’s day in here, even if you’re just telling them your boring week.

I think that’s all, hope I didn’t forget anything. I might post another update if something comes up.

Have a nice one, stay safe and don’t do anything stupid.

CoinPayments services no longer support US based users starting 7/20, as a result we will no longer be using their services.

On the legal front: Active appeal is still ongoing.  There is a fundraising music project in the works (details to come).

Shirts and hoodies also available again (NOT via TEEspring)- via 86 Dresden!

YOU MUST USE HIS NAME/ID + DOB AS A NOTE

We are not sure (at this time) what limits exist for commissary balances.

Per the appeal, we are hearing the process can take up to 6 months (we will post any/all updates here).

No word yet on the appeal process, we expect updates in this regard very soon.

The T-shirt shop has been shut down, as far as we know anything ordered up to this point will still be shipped out.

We will stay in contact with Bond’s attorney, and keep you updated on any sort of appeal process.

As discussed on this podcast, a portion of the funds collected has gone to the attorney; current (and any future) funds raised will go toward commissary and an interest-bearing DAI account (or something comparable in crypto) for post release.

We pray for the Hassler brothers’ safety, sanity, and for (hopefully) a quick release/appeal.

While proceedings are open to the public, it is unclear if these proceedings will be streamed or made available via Zoom or over the phone.

A portion of the Bond funds have been wired to attorney: Dr. Martin Mahrer (3/4/2022).  We expect to wire more in the coming weeks.  A portion is being set aside for commissary needs and for a general fund for Bond himself (the latter of which is collecting interest in DAI).

This page is maintained by TEKNEIN , Shill-Killa Linney (and many others active in helping to reach Mr. Bond and/or his representatives).

ANY/ALL funds raised will go directly to assist in the legal defense of Mr. Bond, or to him and his family during this time.

[Forwarded from Linney]
*Statement and Release Of Document*

As most of you are aware of by now, Mr. Bond was arrested on January 20, 2021 in his home in Carinthia, Austria. He is still awaiting trial as I type this. I would like everyone to know that I am happy to inform you that contact has been made with both Philip (“Mr. Bond”) and his legal defense.

It was not an easy task whatsoever, obtaining his information so we could find him. Even then, trust had to be earned, and the understanding of our intentions to help Philip had to be made clear.

Ten months later, I have written to Philip and have received a letter from him back. I have established as much trust as one can hope given the circumstances with his lawyer.

We do not take this situation lightly at all, and trying to decide what information should be released wasn’t easy either. After many discussions with the others that make up #team freemrbond, and Philip’s lawyer, the decision was made– I was entrusted with a 32 page long PDF file of Philip’s “Anschuldigungen” or “Accusations” file. Meaning his indictments. What this man is facing is absolutely horrifying.

We understand that many of you have wanted to help out, and maybe even donate– but have been hesitant to because until now, we have been unable to provide any proof that we’ve been in contact with either Philip or his legal defense. While this hesitation was understandable, the information in this “statement” should lay to rest any doubts you may have had.

Philip H is Philip Hassler, and he was first taken to the Klagenfurt prison, then transferred 10 days later on January 30, 2021 to the Josefstadt prison in Vienna, Austria. He has a birthday coming up on the 28th of this month as well.

Whether you like his music or not, he is our brother. A man who has committed no crimes, he simply made parody songs and used satirical undertones the same as other musicians have done. Only they aren’t sitting in a prison cell facing up to 20 years. Imagine that for just a moment… imprisoned and looking at a prison sentence sometimes actual murderers don’t even get…

To keep this from turning into a novel, we are asking you for your help. Not for ourselves, but for our brother, who has a name, a family, and a home. Who is guilty of no crimes other than being able to think outside the proverbial box, and using artistic expression and humour to convey these thoughts. Was he aware of the risks? Sure. Does that mean he deserves the consequences? No, it means he put his love and passion for music and for his people – us, and what he felt it conveyed before his own life and freedom. He believed it was worth the price he is now paying. That alone speaks volumes about the honor Philip has. And honor is loyalty.

As loyal fans and supporters, we hope that you will not only donate whatever you can, but also help us spread this message as far and wide as possible! And to as many people as possible!
Even if there are some that don’t and won’t appreciate his music, hopefully they will be supporters of freedom of speech, artistic expression, and freedom of thought. The most basic human right and basic human nature- thought.

If you have any questions, concerns, etc…please don’t hesitate to reach out, contact information below. 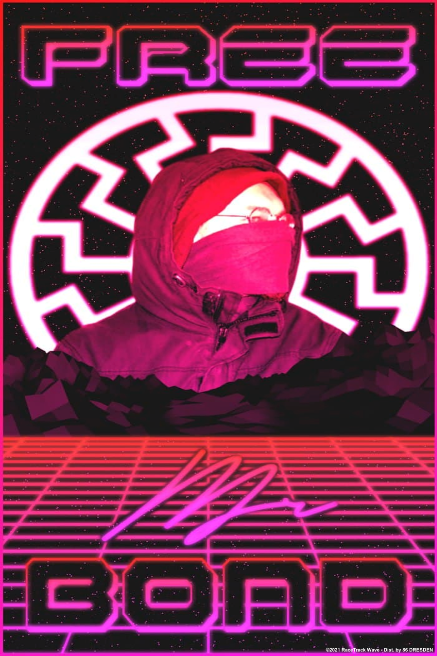 100% of all profit from this poster @ 86dresden.com will go to the #freemrbond fund!

Efforts to reach Mr Bond, his family, and/or his representatives are still ongoing.  ANYONE who feels they can assist us further in this effort please reach out on Telegram or email us directly.  Some progress has been made, but we should be careful not to publish anything officially until we are 100% on our sources.

As per the funds collected to date, they will be allocated to the appropriate representatives if/when we are convinced we are in communication with the right people.  This entire process is very slow and agonizing.  Our hope is to get these funds to Mr Bond in an effort to assist in his current legal situation- however, if we are unable to contact his legal representation, we are confident that these funds will ultimately reach him in some way: be that post trial (by means of commissary), or post conviction (by means of him ultimately contacting us personally).  I would MUCH rather get these funds to him or his people NOW, and getting as many people aware of this effort is the best way to do so.

Share-share-share!  And again, if you can in ANY way assist our efforts, please contact us!